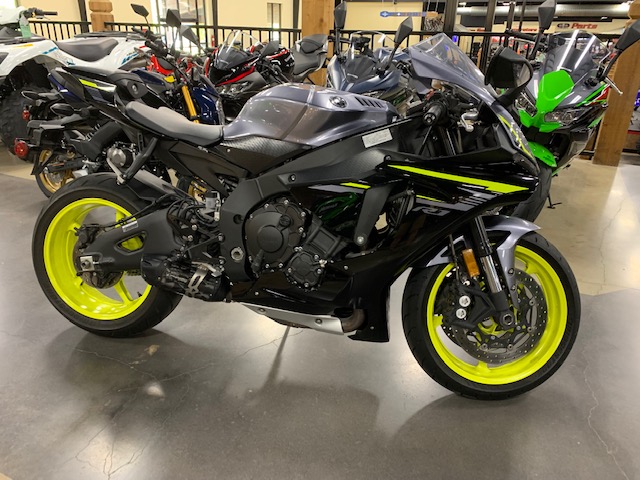 444 people have recently viewed it.
Description

Class-leading Electronics Package
The YZF-R1S features an advanced MotoGP®-inspired electronics package: a suite of inter-related technologies, powered by Yamaha’s six-axis Inertial Measurement Unit (IMU), that enable the rider to enjoy the fullest range of performance with great comfort, control, and ease of operation.

Informed Systems
The IMU consists of a gyro sensor that measures pitch, roll, and yaw, as well as an accelerometer, or G-sensor, that measures acceleration in the fore-aft, up-down, and right-left directions… all at a rate of 125 calculations per second. By calculating each signal, the IMU finds the precise vehicle position and movement, and communicates it to the ECU, enabling it to control the bike’s systems.

Deltabox® Frame
The advanced aluminum Deltabox® frame uses the engine as a stressed member of the chassis and is designed to provide optimum longitudinal, lateral and torsional rigidity.

Compact Exhaust System
A midship exhaust system features a titanium muffler and is positioned low, in the middle of the chassis, for improved mass centralization.

MotoGP® Styling
The styling on the R1S is shared with the YZF-R1M® and YZF-R1® and inspired by the YZR-M1®, purposely sculpted for maximum aerodynamic efficiency.

Compact LED Headlights
LED headlights are both lightweight and compact allowing for a more streamlined design and layout of the front face.

LED Lighting
LED front turn signals are integrated into the mirrors for improved aerodynamics, while an LED tail light is stylish and highly visible.

Factory Level Telemetry
Available as an option is the Yamaha-exclusive Communication Control Unit. The CCU allows riders to communicate with the vehicle via Wi-Fi through Yamaha’s exclusive Y-TRAC smartphone and tablet app. The system is comprised of the CCU and GPS antenna, running data can be recorded via a data logger, with course mapping and automatic lap timing managed by GPS. This data can then be wirelessly downloaded to the Android® or Apple® iOS® app where it can be analyzed. Changes to settings can be made via the Yamaha Ride Control (YRC) setting app and then uploaded back to the R1S.

MotoGP®-Level Controllability
Inertial Measurement Unit (IMU) uses six axes of measurement: It consists of a gyro sensor that measures pitch, roll, and yaw, as well as an accelerometer, or G-sensor, that measures acceleration in the fore-aft, up-down, and right-left directions… all at a rate of 125 calculations per second. The IMU communicates with the ECU, which activates the technologies in Yamaha Ride Control (YRC). YRC includes Power Mode, Traction Control System, Slide Control System, Lift Control System and Launch Control System. All these systems are adjustable and can be saved within four presets in the YRC system.

Lean Angle Sensitive TCS
Variable Traction Control System (TCS) reduces rear wheel spin when exiting corners, calculating differences in wheels speeds and in relation to lean angle. As lean angle increases, so does the amount of intervention… with ten separate settings (off and 1-9) enabling the rider to dial in the exact level of control needed.

MotoGP®-Developed SCS
Slide Control System (SCS), the first of its kind on a production motorcycle, comes directly from the YZR-M1. It works in tandem with the IMU, where, if a slide is detected while accelerating during hard leaning conditions, the ECU will step in and control engine power to reduce the slide. This too can be adjusted by the rider. Four settings (1-3 and off).

Prices shown are not final and do not include sales tax, finance charges, vehicle registration fees, or any other fees required by law. Prices may be subject to changing incentives. If applicable, incentives may require a trade-in, financing, or other specific qualifications and restrictions. Reasonable efforts are made to keep information on this website accurate, but Dealer and/or its affiliates do not assume responsibility for omissions or for misprints or other errors displayed on this website. EPA mileage estimates are for newly manufactured vehicles only, so actual mileage will depend on how the vehicle is driven and maintained.